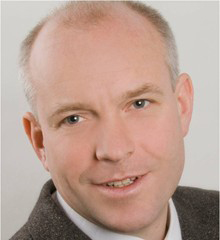 Dr. Christoph Hohle received his Ph.D. degree in 2000 from the University of Bayreuth, Germany, Macromolecular Chemistry Department, where he was working in the field of photorefractive polymethacrylates and amorphous low molecular weight glasses. He joined Infineon Technologies' Memory Product Division (later Qimonda) in 2000 where he originally focussed on design and synthesis of 157nm and 193nm photoresists for optical lithography.

In 2004 Dr. Hohle joined the Center of Competence E-Beam at Qimonda Dresden, working as Staff Engineer responsible for the resist process. Since 2009, he is heading the Patterning / E-Beam Litho Group at Fraunhofer Center Nanoelectronic Technologies (CNT), Dresden. He has (co) authored more than 35 papers and numerous patents in the field of photolithography and served as member of the SPIE Advanced Lithography conference program committee for several years.

Dr. Hohle has been a member of the Continuing Education Institute-Europe faculty since 2012