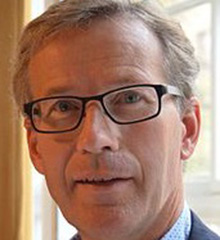 Professor Hultman received a PhD in materials science in 1988 from Linköping Univerity, Sweden.

He did his post-doc period at Northwestern University in 1989-90 and was as a visiting professor at University of Illinois at Urbana-Champaign during 2004-2006. His research activities focus on the materials science and nanotechnology of thin films by vapor phase deposition, in particular ion-surface interactions, microstructure evolution, and properties of advanced functional materials. Professor Hultman is an ERC (European Research Council) Advanced Research Grant awardee. He is the director of major Swedish research centers of excellence featuring strong industry collaboration. He has produced hundreds of papers, reviews, and book chapters. He is the inventor of patents on nanostructured thin films and coating materials and has promoted spin-off companies.

Professor Hultman is since 1995 Professor and Division Head of the Thin Film Physics Division at IFM, Linköping University, Sweden.

In 2013 he joined the Swedish Foundation for Strategic Research (SSF), taking on the role as CEO.

In 1994, Professor Hultman was named Editor of the Journal Vacuum. He has been a board member of The Scandinavian Society for Electron Microscopy, The Swedish Vacuum Society, and The Swedish Association for Surface Engineering (Founding Member 1996). He was Chancellor of Sweden to the IUVSTA 2000-2006. In 1990 he was awarded the Welch Scholarship. In 1993 he received the Swedish Government award for most prominent young researcher. In 2000, he got the Jacob Wallenberg Foundation Award for Materials Science. In 2003, he was announced Excellent Researcher by the Swedish Research Council. More recently, Professor Hultman became a Fellow of the AVS (2006) and Fellow of the Forschungszentrum Dresden-Rossendorf (2007). Since 2008, he is an elected member of the Royal Swedish Academy of Engineering Sciences (IVA - Section V). In 2009 he was elected into the 8th Class of the Royal Swedish Academy of Sciences (KVA). He can be reached by e-mail at larhu@ifm.liu.se.

Professor Hultman has been a member of the Continuing Education Institute-Europe Faculty since 2003.

Course 051 Thin Film Deposition at the Nanoscale - Mechanisms and Applications