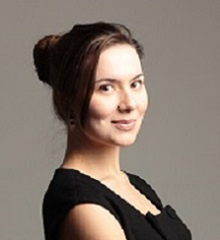 Ms. Dorozhkina is an entrepreneur, economist, and investor in startups. She is a published author of books, Forbes and other magazines contributor, speaker.

She started her marketing career at Nielsen in 2003. After Nielsen, she went on to work in pharmaceuticals, IT, FinTech and Wall Street. Working in such a broad range of industries allowed her to refine her product and business development skills.

In 2012, Katya co-founded her own agency and worked with startups and corporate clients like Samsung, Casio, American Express, American Airlines, and others.

By 2017, just two years after launching the accelerator, she had gone on to back dozens of successful entrepreneurs and had begun to add a further spate of services to the Starta brand.

In early 2017, Ms. Dorozhkina  hatched the idea for what would become Sputnik Space (http://www.sputnikspace.com), an incubation and co-working space for all international founders, which could then become a bridge to the Starta Accelerator for successful startups.

In July 2017, together with CrossCoin, Starta raised $5M for the fund through launching Starta Token ICO, with the purpose of democratizing venture capital fundraising. These results catalyzed the formation of Token Rockets, a two-step 'blockchainization' process for startups, which culminates in an ICO. (http://www.tokenrockets.com)

In October 2017, all Starta initiatives came under the umbrella of the Starta Ventures family. Starta Ventures' mission is to break through traditional venture capital barriers to empower the next generation of tech entrepreneurs.

Katya received her Master's Degree in International Economics and is currently, a PhD candidate in Economics.

In her free time, she writes books for children and donates all the royalties to charity fund.

Ms. Dorozhkina has been a member of the Continuing Education Institute - Europe Faculty since 2017.