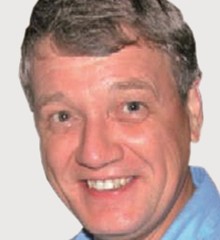 Dr. Ranson is the founder and Engineering Director of Radio System Design a bespoke design and consultancy service specialising in microwave communications technology. He received his Ph.D. degree from the University of Leeds and has been in industry, actively involved in research and development of microwave components and systems for over 35 years.

He has been interested in radio from an early age. He obtained a Class A amateur radio license at the age of 14 and has been building and studying radios ever since. At university he specialised in microwave engineering obtaining a PhD on the now not so common topic of Transferred Electron Devices Amplifiers. His early work was on military systems, designing IFM and band translators for ECM equipment at MEL, then a part of Philips Electronics. He moved to the USA where he worked for AIL and Watkins Johnson Co. As well as various converter and customer specific products Dr. Ranson became a project leader on three major microwave receiver developments. One was the first upconverting, broadband microwave ELINT receiver employing an approximately 22 GHz first IF. The second was an innovative microwave impulse receiver where he was responsible for the key filter designs and the last was a very high dynamic range, triple conversion microwave to baseband processor for ADC signal processing.

In 1996 Dr. Ranson returned to the UK as Subsystems Engineering Director for Filtronic Comtek. There he grew the development team and expanded the company business and capabilities in integrated front end products. After that he became Director of Wireless Research working with a team focused on high efficiency power amplifiers for base station applications. They were early adopters of the Doherty architecture, producing innovative designs for single and multi-carrier linear power amplifiers, employing large Filtronic GaAs pHEMTs and achieving state-of-the-art power added efficiencies. Later he became the Engineering Director of the Integrated Products Group of Filtronic plc responsible for engineering across the four business units in the group. This broad technology base ranged from semiconductor device and MMIC development, through integrated assemblies for point to point radios to advanced radar and ECM sub-systems.

From 2008, Dr Ranson founded and runs Radio System Design Ltd (RSD), a specialist RF and microwave consultancy.  The work has 3 main threads, bespoke design, engineering consultancy and technical training.  RSD has been profitable from inception achieving sales of over (GBP) 1 million in the first 3 years. It has successfully completing substantial engineering contracts, continuing consultancy support and technical training in the UK, Canada, USA and Europe.

Dr. Ranson is a Fellow of both the IEE now IET and the IEEE. Since 2006, he is a visiting Professor at Leeds University and has published technical articles, organized and presented in MTT workshops and presented numerous internal presentations and international seminars. He was the Digest Editor for the 1996 MTT Symposium in San Francisco, where he helped pioneer the publication on CD-ROM. He is a member of the MTT-S 2010 Technical Program Committee, the past Chairman of the MTT Technical Coordination Committee 20 on Wireless Communications. He has also been an Invited Editor for the Special Issue of the MTT Microwaves Letters focussed on European wireless communications technology. In 2006 he was the Technical Program Committee Chairman for European Microwave Week and the General Chair of the ECWT.  Most recently, Dr Ranson served as UK member of the Board of Directors for the European Microwave Association (EuMA).

Dr. Ranson has been a member of the Continuing Education Institute-Europe faculty since 2004.