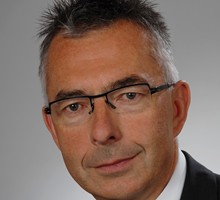 Department Head for Microelectronic Materials and Nanoanalysis at Fraunhofer Institute for Ceramic Technologies and Systems in Dresden, Germany.

He joined Fraunhofer Institute for Ceramic Technologies and Systems in 2009. His responsibilities include multi-scale materials characterization and reliability engineering. He holds an adjunct professorship at Faculty of Chemistry of Warsaw University, Poland, as well as honorary professorships for Nanomaterials at Brandenburg University of Technology Cottbus and for Nanoanalysis at Dresden University of Technology. Ehrenfried Zschech was appointed as distinguished research professor at Hankou University in Wuhan, China. He has published three books and he has authored or co-authored about 200 papers in peer-reviewed journals in the areas of materials science, solid-state physics and reliability engineering. Ehrenfried Zschech is member of the Board of Directors of the Materials Reserach Soceity (MRS) and Honorary Member of the Federation oft he European Materials Societies (FEMS).

Ehrenfried Zschech has been activily supporting the German Materials Research Society (DGM) and the Federation of the European Materials Societies (FEMS). He was acting as DGM Board Member and as FEMS Executive Member. Ehrenfried Zschech was elected FEMS President for the period 2012-2013. He has been Member of the Steering Committee of The European Platform on Advanced Materials and Technologies (EUMAT) since 2013 and Operational Management Board Member of the European Materials Characterization Council since 2016.

Ehrenfried Zschech received his Dr. rer. nat. degree from Dresden University of Technology. After having spent four years as a project leader in the field of metal physics and reliability of microelectronic interconnects at Research Institute for Nonferrous Metals in Freiberg, he was appointed as a university teacher for ceramic materials at Freiberg University of Technology. In 1992, he joined the development department at Airbus in Bremen, where he managed the metal physics group and studied the laser-welding metallurgy of aluminum alloys. From 1997 to 2009, Ehrenfried Zschech managed the Materials Analysis Department and the Center for Complex Analysis at Advanced Micro Devices in Dresden. In this position, he was responsible for the analytical support for process control and technology development in leading-edge semiconductor manufacturing, as well as for physical failure analysis.

Professor Dr. Zschech has been a member of the Continuing Education Institute-Europe faculty since 2009.