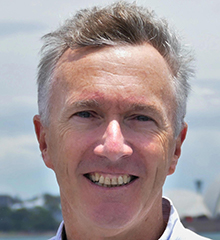 Dr. Gilmore was a pioneer in developing and applying harmonic balance analysis to RF and microwave circuit design, enabling for the first time the accurate modeling of non-linear behaviour in microwave circuits. While Vice President of Engineering with Compact Software, he led the introduction of Microwave Harmonica, the world's first commercial simulator applicable to the nonlinear design of microwave and RF circuits, and that is now commonplace in designers’ toolkits.

Dr. Gilmore gained his RF circuit and systems experience over a number of years at Schlumberger and at Central Microwave, where he designed and developed numerous linear microwave power amplifiers, as well as oscillators and switching components. Subsequently, while at Compact Software, he was responsible for the development of their entire software suite of computer aided design tools. He was later Vice President at SITA-Equant, operator of the world's most extensive data network (now part of France Telecom’s Orange Network), where he worked with a number of airlines and multinationals on their data telecommunications and IT needs. He has been CEO of EM Solutions since 2011, where he leads an award winning team of engineers who are involved in the design of multi-band, high power receivers, transmitters, and mobile terminals used in satellite communications systems sold around the world.

He has published more than thirty articles in the field of microwave systems and circuit design, and has served on the editorial boards of the IEEE Transactions on Microwave Theory and Techniques, and of Wiley's International Journal of RF and Microwave Computer-Aided Engineering. With Dr. Les Besser, he is co-author of the widely read two-volume textbook Practical RF Circuit Design for Modern Wireless Systems. He is a Fellow of the Australian Academy of Technological Scientists and Engineers.

Dr. Gilmore has been a member of the Continuing Education Institute-Europe faculty since 1995.